By Jim Henry
The Joplin Globe

The Ron Jones family centers around basketball. And it has for many years.

Among Ron and daughters Shakara and Sharese “Winkie” Jones, they have combined to score 8,312 points during their high school and college careers. That number will continue to grow as Sharese is completing her sophomore season at Missouri Southern. 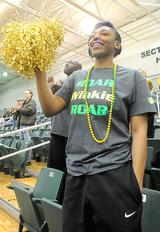 “They influence me a lot,” said Sharese, who’s averaged 14.3 points and 6.7 rebounds this season and is the only player to start every game for the 14-5 Lions. “I look up to my sister big time. I’ve always tried to compete against her, try to beat her out of stuff.

“My dad, I would always go to him, too. But I’m a better shooter than he was. I would say so.”
Anita Jones, the wife and mother, never played basketball.

“I never played it at all and was never interested in playing,” she said. “I’ve always been a spectator, spectator/cheerleader I guess you could say.

“Dating Ron, I was always around basketball, but I didn’t know our two kids would play, too. It’s been fun.”

Anita was a cheerleader at Cape Girardeau Central High School. She first met Ron when they were in kindergarten.

“Some people say we started dating in kindergarten,” she said with a laugh.

Ron, a 1980 graduate of Cape Girardeau Central, still holds school records for points in a game (48) and career (1,556). He led the Tigers to the 1980 Class 4A state championship and went on to play on three Big 8 Conference championship teams at Missouri.

He also had the opportunity — or challenge — of guarding Michael Jordan three times. In the first meeting the Tigers beat North Carolina 64-60 on Nov. 27, 1982, at the Checkerdome in St. Louis. Jordan scored 13 points that night, and there is a 27-second clip on YouTube about that game that labels Jones as a “defensive specialist.”

View all posts by: MO Impact